Visit the lush beauty of Oak Creek Canyon and see the colorful wonders of Sedona on the way to a number of ancient Indian ruins, including the Tuzigoot Pueblo and Montezuma’s Castle.

At Tuzigoot Pueblo, you will enter into the ancient past of the Sinagua people, which is Spanish for "without water".  They built and lived in the Tuzigoot Pueblo, whose name is Apache for "crooked water".  This name was probably given to them because their pueblo is located close to the Verde River, which meanders like a snake through the valley.  The pueblo is 120 feet above the floor of the Verde Valley and was built between 1000 and 1450 AD. This village crowns the summit of a long ridge overseeing most of the valley. The original village was about two stories high and excavation reveals 77 ground-floor rooms.  For more information, go to Tuzigoot National Monument.

You will also visit the ageless ruins at Montezuma Castle, built under overhanging cliffs that are a hundred feet above the banks of the small Beaver Creek. Also built by the Sinagua people, this is a beautiful piece of architecture five stories high with over twenty rooms in the pueblo. Montezuma Castle is one of the best preserved Indian ruins in the Southwest. Though there are many theories, all the Indians of this entire area seemed to vanish or move in the 1400 AD period time frame.  For more information, go to Montezuma Castle National Monument. 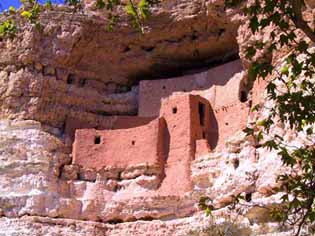 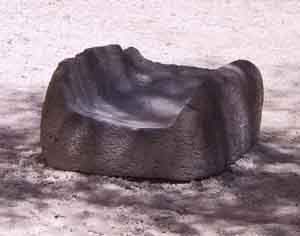 The Sinagua used stones to grind up their corn into flower.   A matate (or metate) is the large stone on which the grain was placed. A mano is a smaller stone tool (or rock) that was used to grind corn or other grains.  Held in their hand, it was pushed over the matate to break down the grains into a flower.

Close by, other Sinagua people of the same origin irrigated their crops with the pristine spring waters of Montezuma Well, a limestone sink formed centuries ago by the collapse of an immense underground cavern. The Sinagua Indian dwellings in this area vary in size from one-room houses to 55 room pueblos. You will get a feel for the importance of water in this dry landscape as you walk across the meadows in which these ancient ones raised food for their families.  Over one and a half million gallons of water a day flow continuously, providing a lush, verdant oasis in the midst of surrounding desert grassland. The waters of the well contain several forms of plant and animal life not found in any other waters of the world. This unique habitat is perhaps due to the constant input of large quantities of warm water that enter through underground springs, keeping the environment within the well very stable.

Prehistoric Hohokam and Sinaguan cultures took advantage of this source of water by irrigating crops of corn, beans, squash, and cotton. The rich riparian and surrounding uplands provided wildlife and native plants to supplement the agricultural products. Visitors to the site can still see traces of ancient lime encrusted irrigation ditches from past farming activity.

The Sedona area is one of such profound beauty that it could have easily become one of our most spectacular National Parks.  Sedona rivals the famous Grand Canyon as Arizona's second most popular tourist attraction. Its many scenic and cultural features throughout this “Red Rock Country” distinguish Sedona. Most of Sedona’s appeal is attributed to its unique and scenic geology.   Sedona has also been a major attraction to filmmakers for decades where many Western Cowboy motion pictures were made.  Hardly a day goes by that you don't see a scene from the Sedona area in a television advertisement.  For more information on the Red Rock Country, go to the Red Rock State Park.

The Sedona area was first discovered by the movie industry in 1923 when Victor Fleming filmed The Call of the Canyon, a black and white silent movie adapted from Zane Grey's novel.  The movie was actually filmed in Oak Creek Canyon at the confluence of West Fork and Oak Creek, at a site that was to become a popular early resort.

Sedona was founded in 1902, ten years before Arizona became a state when President William Howard Taft was president.  Sedona is named after the wife of one of the early settlers, T. C. Schnebly.  The original names suggested for the settlement were Oak Creek Crossing and Schnebly Station, which were both rejected by the postmaster because they were too long to fit on a cancellation stamp.  One name that did stick is Schnebly Hill Road; one of the most scenic back country drives in the area.  At the time, this whole red rock country was wild, remote and virtually unknown.  It is now one of the most scenic destinations in the Southwest.

View a Photo Slide Show of the Sedona Area