A granite island towering regally over pine-carpeted hills, Mount Rushmore National Memorial is an American icon and an inspirational monument to the country’s first 150 years. Etched into the 5,725 foot (1,745 m) summit of the rough granite mountainside are the familiar features of four United States Presidents: George Washington, Thomas Jefferson, Theodore Roosevelt, and Abraham Lincoln, each measuring 60 feet tall (18 m), the average height of a 6-story building. Taken individually, the heads are each an astonishing likeness and a remarkable accomplishment. Put together, the four presidents are awe-inspiring, standing as silent sentinels over their beloved America.

The dream that became Mount Rushmore originated with South Dakota state historian Jonah Robinson’s visualization of a panorama of the American West, involving a procession of notable Indian leaders and American explorers, carved out of the series of massive granite spires known as the needles. However, Rushmore’s chief sculptor, Gutzon Borglum, developed a far-reaching vision for an even grander project that would elevate the memorial from a regional endeavor to a national cause. He chose Mt. Rushmore for the site, saying of it that, "America will march along that skyline."

Borglum chose these four Presidents because they, more than any others, embodied the first 150 years of American history, representing its founding, expansion, preservation, and unification.

A Danish immigrant known for his distinctly “American” art, Borglum envisioned the four Presidents carved from the waist up, scaled to men who would stand 465 feet tall. Beside them, an immense entablature in the shape of the Louisiana Purchase would be inscribed with a brief history of the United States, emphasizing that Mount Rushmore was a national memorial, not just a monument to four great men. Unfortunately, after 14 years of work on the mountainside, Borglum died suddenly, leaving only the Presidents’ heads completed. 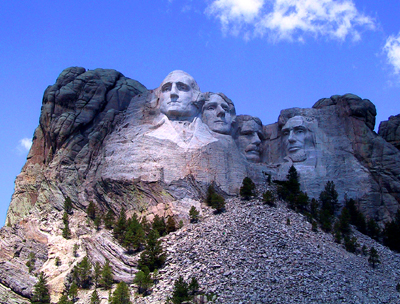